The train and bus station forms an important transport hub in Merano. All city and important intercity buses are connected to the station. 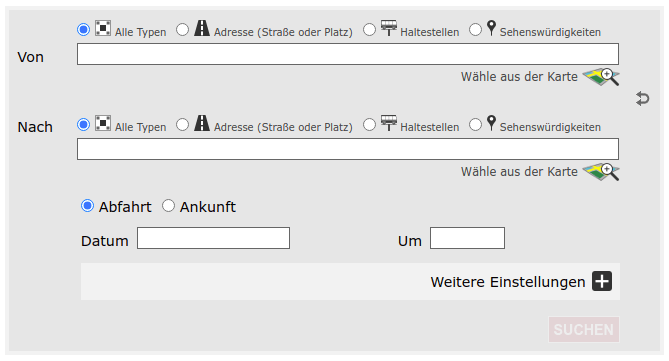 In the hall of Merano railway station, after the main entrance on the right-hand side, there is a ticket office where you can buy bike tickets, value tickets, city tickets, day tickets for Merano and Bolzano, tickets for regional trains, the Mobilcard, the Bikemobil Card and the Museummobil Card during opening hours.

Parking at the station

Car parking: Near the train station, directly opposite, is the large Prader Platz with free parking. Every week on Friday, the Merano market takes place here and therefore Prader Platz is not available as a car park on Fridays. On Tuesdays, the popular car park is partially closed for a smaller weekly market. To the west of the station, i.e. in the direction of Vinschgau, there is a area with parking spaces. Parking in Merano

The following car rental companies offer their services in Merano:

Through a cooperation with Deutsche Bahn (Flinkster) and thus also with all their partners, all those, who are already registered with one of these car sharing providers can use the car sharing vehicles in South Tyrol and book them autonomously. New registrations can be made by appointment at a Car Sharing Infopoint. The invoice is issued by the respective provider. Further information: Car-sharing in South Tyrol

Merano railway station has a station café with a restaurant and terrace, as well as a kiosk with a tabacco shop.

There is no luggage storage or lockers directly at Merano train station.

From the station to the centre of Merano

You can reach the Lauben in Merano's old town on foot from the train station in about 15 minutes. Possibilities to get to the centre: