Railway line through the Vinschgau Valley from Merano to Malles 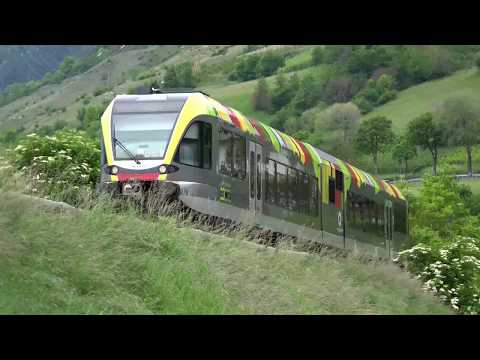 History of the Vinschgau Railway

The Vinschgau Railway runs from Mals in the Vinschgau Valley to the Mediterranean city of Merano. The Vinschgau Railway was originally planned in 1906 as a section of an Alpine crossing west of the Brenner Pass. The railway line of the planned Reschenbahn was to cross the Reschenpass and run through the Inntal valley to Landeck railway station. The project „Reschen Bahn“ could not be realised due to the end of the First World War, thus because of the division of Tyrol. The Vinschgau Railway was taken over by the Italian state railways. In 1990, the railway line was finally closed due to an ever-increasing deficit. Passenger transport shifted to buses on the road until the railway line together with the stations were renewed and restored. On 5 May 2005, the Merano-Vinschgau line was reopened. Today, the train through the Vinschgau Valley is one of the most modern in Italy. From the opening, the train ran through the Vinschgau Valley at hourly intervals, and in 2006 half-hourly intervals were introduced at peak times. Trains are often overloaded, especially in the summer months, so the EventCard was introduced for bikers. The EventCard allows you to rent bikes at selected stations, so you don't have to carry your own bike on the train.

Over a length of just under 60km, the Vinschgau train climbs around 700 metres in altitude. Especially from Merano via Marlengo up to Tel, a large difference in altitude is overcome. The train passes through three tunnels and a gallery. During the restoration of the Vinschgau Railway, special safety measures were taken in this section, as the terrain is geologically extremely difficult. Due to the good quality superstructure, you can reach a maximum of 70 km/h in most of the curved sections. On straight and flat sections, the speed limit of the Vinschgau Railway has been set at 100km/h.

A modern electronic signal box, which meets the highest safety level in railway applications, is responsible for the safety of the Vinschger Bahn. It enables remote control of the traffic on the Merano – Malles railway line, so that - if necessary - service braking can be triggered if the speed limit is exceeded by the train driver and even emergency braking can take place. Passenger information is also integrated into the control system. Electronic displays and loudspeakers automatically inform passengers about train arrivals, delays, track changes, etc. The system is also equipped with an emergency braking system. The 31 level crossings – secured with warning signals and barrier systems – are also integrated into this safety system.

With the aim of being a showcase for public transport, the railway and stations were built to be accessible to the disabled. Stations, platforms, car parks, sanitary facilities, restaurants and cafes were examined by a study and classified as accessible.